Its the holiday season! Any products ordered today will ship after January 31st, 2021.

This past month in October, I had a wonderful opportunity to take a tour of Europe and to visit some of the most breathtaking spectacles of the Old World. I travelled through the rolling hills and the ancient cities of Italy, saw the ruins of Pompeii and the majesty of Rome, the canals of Venice and the grandeur of Naples. I took in the sights of the rustic Italian countryside as I made my way north into France. My journey ended with a magnificent trek through Paris, the City of Light, where I visited the many renowned museums and saw some of the finest artwork created by Man.

As I traveled through France and Italy, and as I returned home across the wide Atlantic, I was overwhelmed by a sense of awe at the things that I had seen. It was an incredibly rewarding experience, and it filled me with renewed inspiration as an artist and as an admirer of beauty. Over the following weeks and months, I hope to share some of the paintings that resulted from my European tour with you.

The first leg of my journey took me through southern Italy where I saw Naples, a city with a rich history and with architecture to match. Founded two and a half millennia ago by the Greeks, and once the capital of the Kingdom of Naples, the city offered everything from ancient palaces to the castles of Bourbon kings. I also took the chance to appreciate the nearby ruins of Pompeii, and to see the craftsmanship of the Romans with my own eyes. From Naples I went through central Italy, a region celebrated since the time of the Renaissance as an international centre of art. I visited the cities of Siena, Pisa and Florence in picturesque Tuscany, the birthplace of the Renaissance masters and home to such wonders as the Tower of Pisa and the palaces of the Medici family.

In Florence I stopped at the Gallery Uffizi, home to the work of artists like Leonardo, Michelangelo, Titian and Raphael. As an artist, it was the fulfillment of a lifelong dream to see the work of these giants for myself. It was truly incredible to enter a building that boasted such opulence under its roofs. Perhaps even grander than Florence, however, was the Eternal City, Rome and the Vatican, seat of the most famous collection of art in the world. There I experienced, in all its pomp and resplendence, the beauty that emperors and popes had amassed over the centuries.  I was particularly moved by Michelangelo’s masterpiece, the painting in the Sistine Chapel, which inspired so many of the artists that came before me. I was encouraged to try and capture the awe that I felt in my own art, and I am sure that you will some of that influence in my upcoming work.

My final stop in Italy was in Venice. Venice is well-known for the allure of its many canals, and I was not disappointed. I also saw the paintings of the Gallerie dell’Accademia, which houses Leonardo Da Vinci’s famed Vitruvian Man as well as the masterpieces of artists like Bellini, Veronese and Hieronymus Bosch. I was so charmed by the waterfront buildings and the canals of old Venice that I was immediately drawn to paint the scene. My Grand Canal In Veniceand Venice Canal are some of the first products from my trip to Europe and I am sure that many others will follow.

I ended my tour by visiting the museums of Paris, where art from all over the world and from all periods of history are gathered. I of course took a tour of the Louvre, among the greatest museums of art in the world. The Louvre is perhaps most famous for displaying Leonardo’s Mona Lisa, but is also home to everything from Babylonian statues to Mannerist paintings.

I’ve also attended the Carnavalet Museum, a fascinating structure dedicated to illustrating the long and storied history of France. Quite appropriately, one of the last locations that I visited was the Centre Georges Pompidou, a museum of modern art that features the works of 20th century masters like architect Frank Gehry and the avant-garde artist Marcel Duchamp. I also climbed the towers of Notre Dame and Montparnasse on the river Seine, taking photographs of Paris’s famed skyline and rooftops. Though I have painted scenes from the City of Light in the past, I hope to create some new and exciting works with a fresh perspective in the coming months. 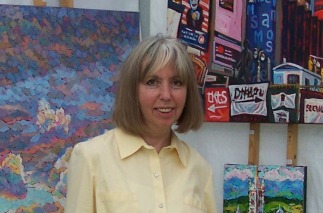 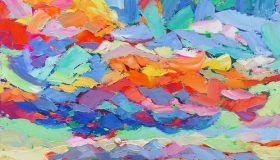 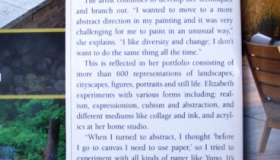 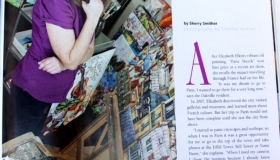